Over on https://mathlesstraveled.com there’s a series of posts going on having to do with this: 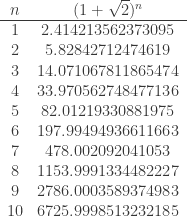 approaches integer values. Odd, huh? Why does it do that?

Despite what should have been a dead giveaway hint, I didn’t figure out the approach revealed in this post. Embarrassing. But having failed on the insight front, what can I do on the obvious generalization front?

Let’s think about quantities of the form

To investigate that we’ll consider

-gon. Using the binomial expansion, the sum is

is a multiple of

is equal to 1 and the sum over

Otherwise, we’re summing over the points on the unit circle:

which is the sum of a geometric series so

All right then. This means we keep only the terms where

is a multiple of

which is an integer. Call it

Now in the case

is an integer anyway; point is,

both approach integers (the former much more quickly than the latter).

By symmetry the magnitudes of the two complex numbers are the same, so what we need is

So there are no integer values of

that give convergence to an integer for

. It seems evident the same is true for all