The latest Maths Puzzle from Matt Parker concerns itself with distancing, not socially but uniquely. Can you put three markers in a 3 by 3 square such that no two marker-to-marker distances are the same? You can:

Here A and B are 1 unit apart, B and C are √5 units apart, and A and C are 2√2 units apart. Not counting reflections and rotations, there are 5 distinct ways to put three markers in a size 3 square at unique distances:

Parker asks for a solution for six markers in a 6 by 6 square. I very quickly convinced myself that if there’s an intelligent, elegant way to get such a solution by pencil and paper, I wasn’t going to find it. Instead I wrote a Python script to find all solutions for any size square. Any size to a point, anyway.

How many ways are there to put

square? If you number the positions 1 through

; the number of ways of doing so is

The subroutine does nothing if it finds non-unique distances within the pattern. If the distances are unique and the number of markers is equal to the largest number previously seen with unique distances it adds the pattern to a list of solutions; if the number of markers exceeds the largest number previously seen, it erases the list of solutions and starts a new list with this pattern. Then it calls itself recursively to investigate patterns made by taking the original one and adding a marker at each of the rightmost empty positions. (In this case it checks “*.**…..”, “*.*.*….”, “*.*..*…”, “*.*…*..”, “*.*….*.”, and “*.*…..*”)

Actually it does the above only after looking at the eight possible rotations and reflections of the pattern and seeing whether it’s the lexicographically smallest of the eight.

Having done that for squares, I modified the script to do other dimensions: Rows of

positions or cubes of

positions. Rows are easy — the number of combinations grows slowly. Cubes grow very fast. Worse yet, checking all 48 possible rotations and reflections in three dimensions gets complicated, and once I finally got that code working, I discovered that even though checking for rotations and reflections cut way down on the number of positions it needed to examine, it was slower than examining all positions, because the reflection and rotation checking took so much time! Then I realized it’d make more sense to check for duplicate distances first, then check for rotations and reflections before doing the recursive calls, and that did speed things up somewhat, but not enough to make a lot of difference. There are probably smarter ways to do it in Python, and probably even smarter ways in C, but I’ll leave those to someone else to work out.

For rows I looked at sizes up to an arbitrary limit of 20. For squares and cubes I stopped when I got to a size that took more than about three hours. Successive size squares took about ten times as long, and successive size cubes about 200 times as long! The results:

Matt Parker’s newest Maths Puzzle asks you to provide the shortest solution to a triangular peg jumping puzzle. Start with ten pegs in ten holes arranged in a triangle:

Remove one peg. Now start jumping pegs, checkers style, but in any of six directions. For instance if peg 1 is removed then you can jump peg 4 over peg 2 into position 1, or peg 6 over peg 3 into position 1. The jumped peg is removed. That’s a move, but if you can jump two or more pegs in succession with the same peg (removing them all) that counts as a single move too. Non jumping moves are not allowed. Keep going until you’re left with only one peg, or there are no legal jumps.

There are ten pegs but really only three pegs to consider removing: A corner peg like 1, an edge peg like 2, or the center peg, 5. In each case what’s the best strategy for clearing the board? Can you clear the board, and in how few moves? For bonus points, can you find ways of winning with the last peg left in a given position?

END_OF_DOCUMENT_TOKEN_TO_BE_REPLACED

If A, B, C, D and E are all unique digits, what values would work with the following equation?

must be even, and

This is fairly mechanical although I tripped up several times on the way.

be the number of coconuts found by the

be the number of coconuts found in the morning.

is divisible by 7 so write

and hid one seventh of the rest, so

. For that to be an integer

must be a multiple of 6, so write

You see how this goes.

. The smallest value corresponds to

These pirates were either very sleepy, or incredibly quick at counting coconuts.

and move its last

digits to the front. What is the smallest

such that when you do this, the result

is in the range

. So the digits of

, and the digits of

are the remaining digits of both. Let

be the number of digits in

are relatively prime, we must have

So we must calculate

and then, for each possible value of

and look for the least

that satisfies the above relation. (The minimal value of

is in fact not

, since there can be no carry to an additional digit when

.) Then we can compute

, and verify that it does indeed have

digits. The smallest such

has a common factor with some

is some factor of

, the number of digits in

, is on the order of

is prime the solution tends to be many orders of magnitude larger than when it is not.

. In that case some values of

have a common factor with

is prime. The number of digits in

is prime too. We end up with the 1499 digit solution 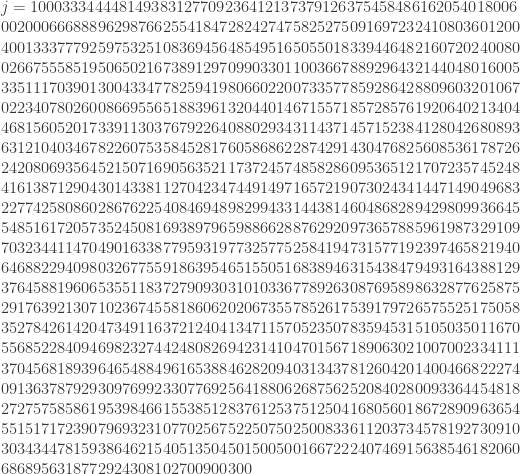 If you’d asked me to guess, before I worked any of this out, the order of magnitude of the smallest positive integer which is exactly tripled when you move the last three digits to the front, I’m pretty sure I would have seriously underestimated it.

From Joseph Converse, a puzzle of digital manipulation:

Imagine taking a number and moving its last digit to the front. For example, 1,234 would become 4,123. What is the smallest positive integer such that when you do this, the result is exactly double the original number? (For bonus points, solve this one without a computer.)

Write the number (call it

be the number of digits in

; then the number resulting from moving the last digit to the front is

so isn’t a multiple of 19, and therefore

must be, that is,

, though. So the smallest number that works is

to have the same number of digits as

, and that means the first digit of

Now, the last digit of

is 4, which is also the second to last digit of

. And then the second to last digit of

is 8, which must be the third to last digit of

. Then the third to last digit of

is 6, with a carry. That means the fourth to last digit of

is 6 and the fourth to last digit of

And so on, until we reach a place where the digit of

is 2 without a carry. Stop there. Follow that procedure and you get

Except we don’t know that this is the smallest answer. We need to do the same with last digit of

running from 3 to 9. In fact (and as you’d expect having seen the other method) this is the smallest.

I’m rather surprised the second way didn’t occur to me sooner; it seems a good deal more obvious in retrospect. Then again, had I done it first I think I might’ve looked at the size of the result and been unconfident I hadn’t overlooked something that might give a smaller answer. The first method confirms it and makes it more clear, I think, that this really is the minimum. It also provides the insight that the answer is not just a mysterious sequence of digits but is connected with the decimal representation of 1/19.

Instead of moving the digit to get multiplication by 2, what about by 3? Or by

Here’s a table for

instead of base 10. There’s no solution in binary, as you can figure out by trying to adapt either method above, or just by noting that doubling a number in binary means appending a 0 to the right end, so you can’t double a number and get a number with the same number of binary digits (bits). In base 3, starting with final digit 2 for

, the final digit for

gives 0 for the next digit of

And if this Python script is bug free, then

is the smallest base 15 number which is multiplied by (decimal) 10 when the last digit is moved to the front. At 148 digits, it’s the longest such number for all bases up to 16 and all factors up to (base-1).