I’ve been learning a little about pyplot, and I’ve drawn a diagram: 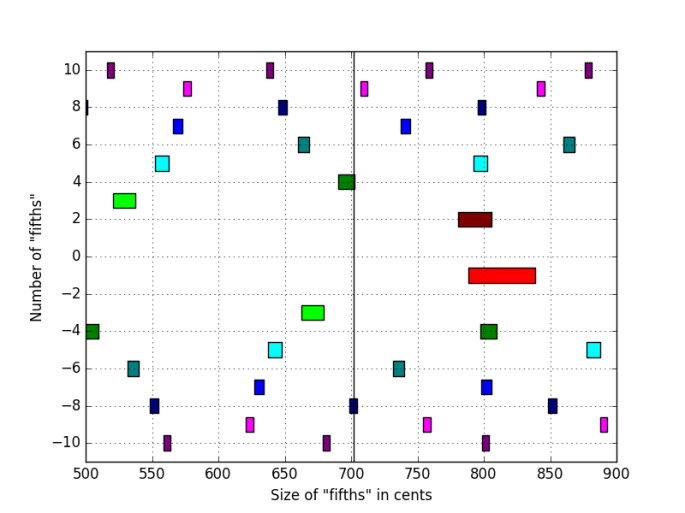 This shows as horizontal bars the range of “fifths” (or generators) for which n generators give an adequate major third. “Adequate” here means within 25 cents, and n is the number on the vertical axis; negative n means fifths downwards, positive n is fifths upwards. The black line is at 702 cents, a just perfect fifth. The bar colors just help distinguish different values of n (and make it a little less boring than if everything were blue).

I’ve been thinking more about musical tuning than CAs lately. For instance, four perfect fifths make (more or less) a major third. How crazy is that?

The diatonic scale most western music’s been based on for the past couple millennia comes from ancient Greece; they developed it by tuning their tetrachords using seven consecutive notes on a circle of fifths — F, C, G, D, A, E, B, for instance. Using a just perfect fifth, 701.96 cents, (Pythagorean tuning) the A (four fifths up from the F) is 2807.82 cents above F, or, dropping it down two octaves, 407.82 cents. This is not a particularly great approximation to a just major third, 386.31 cents, but it’s fairly close. Close enough that when music written in octaves or fifths or fourths gave way to use of thirds, musicians developed other ways of tuning diatonic scales for better thirds rather than dumping the entire system. What we’ve ended up with is equal temperament, with 700.00 cent fifths, four of which make a 400.00 cent major third.

So for many centuries we’ve been using a scale that was based on octaves and fifths to make music that uses thirds, because it happens to contain thirds that are close enough to just. Now, it’s a little odd to be using probabilistic terms to talk about simple arithmetic — two and two isn’t likely to be four, it is four — but I think you know what I mean when I ask, how likely is that? How lucky did we get?

It’s a hard question to quantify. But let’s generously say a major third is adequate if it’s within 25 cents of just. That’s a 50 cent range you want four fifths to fall into, so a single fifth has to be within a range a quarter of that size, 12.5 cents. If you didn’t know beforehand the size of a just perfect fifth, but knew it was somewhere between 650 and 750 cents, you might guess the odds of four fifths making a major third would at most be 12.5/100, or one in eight. Though worse, maybe, because the 12.5 cent range where it works might not be entirely contained within 650 to 750. In fact it might not overlap that range at all. (Though in actuality the range is from 690.33 to 702.83 cents.)

Oh… but you also want to consider four or fewer downward fifths, or equivalently, four or fewer upward fourths. That improves the odds.

So let’s do a little simulation. Pick a number in the range, say, from 650.0 to 750.0 and see how many fifths, up or down, it takes to make an adequate third. Repeat, and get the distribution. Then ask about things like the average number of fifths needed.

Of course you have pretty much zero chance of picking 720.00 at random, but if you pick, say, 719.932771, you’ll have to add a lot of fifths before hitting an adequate third. (1099 of them, looks like.) You’ll get occasional large numbers, then, and they’ll have a big impact on the mean value. The answer you get will fluctuate a lot depending on which large numbers you end up with.

This is why medians were invented.

So I wrote a little Python script to do this. If you take the range of possible “fifths” as 650 to 750 cents, then there’s about a 22% chance four or fewer fifths, up or down, will produce an adequate third. The median number of fifths required to make an adequate third: 11.

I think it’s safe to say if you needed 11 perfect fifths to make an adequate major third, the system upon which western music developed would have been entirely different. Different how, I have no idea, but different. Needing only four fifths was a “lucky” break… not win-the-lottery lucky, but definitely beating-the-odds lucky.